This article is about the TV series. For other uses, see The Jetsons.

The Jetsons is an American animated sci-fi TV sitcom produced by Hanna-Barbera (H-B) for ABC. It originally ran from 1962 to 1963, for 24 episodes that spanned one season. It was the third prime-time sitcom geared towards adults, after The Flintstones and Top Cat. The series was revived between 1985 to 1987, with 51 other episodes that spanned another two seasons, but aired as part of The Funtastic World of Hanna-Barbera programming block in syndication.

It was the Space-Age counterpart to The Flintstones, who lived in the Stone-Age, where life was assisted by dinosaurs and birds, whereas The Jetsons lived in a far-off future utopia, with robots and other fantastical gadgets eased everyday lives. The humor of it, though, was that they still found life difficult.

The series is largely about the middle-class George Jetson dealing with the everyday problems of his loud boss, Cosmo Spacely, despite his mundane routine of pushing a button to get Spacely's factory working. He also deals with family life, having to fulfill the needs and expectations of his wife, Jane, teenage daughter, Judy, and preadolescent son, Elroy. He also has to deal with an overly loving pet dog and a snappy robot maid. In the second season, an alien named Orbitty was added to the family.

The score was composed and conducted by Hoyt Curtin, who also composed and arranged the theme song, with lyrics written by Joseph Barbera and William Hanna. The music was directed by Paul DeKorte for the second season, then Joanne Miller was the director of music supervision for the third season, according to the credits.

Between 1963 and 1985, Hanna-Barbera's first attempt in reviving the series was in the form of a sequel that would have aged Judy and Elroy by ten years. It was pitched to CBS in 1974, but the network rejected it and had Hanna-Barbera retool it as Partridge Family 2200 A.D.

Soon after this new version ended, two TV movies followed, which were The Jetsons Meet the Flintstones and Rockin' with Judy Jetson, followed by a seemingly de facto series finale in Jetsons: The Movie, a theatrically released film by Universal Pictures in 1990. 27 years later in 2017 (with Hanna-Barbera having been absorbed into Time Warner in the late 1990s), Warner Bros. Animation produced the first and only direct-to-video film, The Jetsons & WWE: Robo-WrestleMania.

In the 1990s, Ed Scharlach wrote a pilot for a new series, but was canceled when Time Warner acquired the studio by purchasing its parent company, Turner Entertainment.

A live-action film has also been in the works since the 1980s. In 2017, a live-action TV series was announced to be executive produced by Gary Janetti, Jack Rapke, and Robert Zemeckis, and written by Janetti for ABC. With a name as big as Zemeckis, things will surely get moving quickly... Not. Nothing has been announced since. 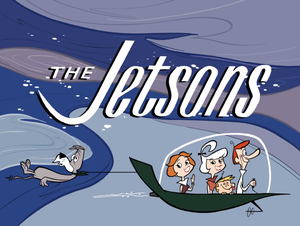 Former Hanna-Barbera animator John Kricfalusi, better known as John K., started up his own animation studio Spümcø in 1989, which created the referred The Ren & Stimpy Show for Nickelodeon in 1991. In 1999, Cartoon Network gave him his chance to show his "love" for old Hanna-Barbera cartoons by creating a short called "Boo Boo Runs Wild." Other shorts followed periodically, which included his takes on The Jetsons. In 2001 and 2002, he created "Father & Son Day" and "The Best," respectively, for Cartoon Network's official website. After this, the world never had to see another one of John K.'s so-called tributes again.