The series is a spin-off spoof of the more kid-friendly Hanna-Barbera series from the 1950s-80s, with Birdman from the Birdman segments of Birdman and the Galaxy Trio as a starting point, who has gone from fighting crime as a superhero to serving justice in a courtroom, representing the law firm Sebben & Sebben, with the staff mostly comprised of the heroes of Birdman, while his rivals are made up of past villains. Birdman's clientele is made up of usually warped stars from Hanna-Barbera series that either predate or came after Birdman. The primary object of this is to poke fun at the adult innuendos in Hanna-Barbera's many shows that were usually aired in Saturday morning blocks for children.

Eleven years later in 2018, Adult Swim broadcast the special, Harvey Birdman: Attorney General, and then had a spin-off commissioned in the form of Birdgirl in 2021.

The entire series has been released on DVD.

The music was composed by Michael Kohler at Bluetube. 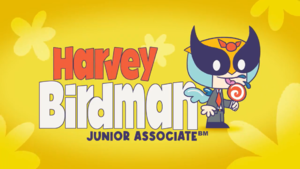 For April Fools Day 2021, Adult Swim advertised they would be making regressed versions of their cartoons, such as Harvey Birdman, Junior Associate.