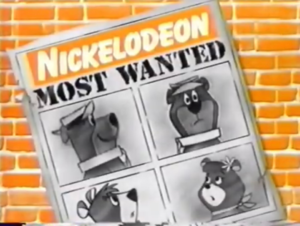 Yogi Bear on the Nickelodeon's Most Wanted bumper.

Nickelodeon, or Nick for short, is a television channel that is run by Viacom. Ever since it first launched on April 1, 1979, the channel has aired various television series (mostly being original shows by the animation studio). The network hit its stride in 1991 big time when they introduced to the world John K.'s Ren & Stimpy, Rugrats, and Doug, and then if that wasn't good enough, they ended the decade with SpongeBob SquarePants. That decade, they also created live-action content with Clarissa Explains It All, Are You Afraid of the Dark?, All That, Kenan & Kel, and The Amanda Show. Suffice to say, that millennials probably saved the channel from shutting down.

From October 1, 1990 to September 11, 1993, when Cartoon Network and Nickelodeon weren't battling for who got the biggest audience, Nickelodeon aired episodes from the Yogi Bear franchise for a block called "Nickelodeon's Most Wanted."