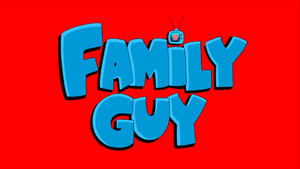 Family Guy is an American adult animated sitcom produced by Seth MacFarlane's Fuzzy Door Productions and 20th Television (formerly 20th Century Fox Television) for the Fox Broadcasting Company. It has been on the air since January 31, 1999, with almost 400 episodes across 20 seasons, along with a direct-to-video movie and three Star Wars-themed specials. It was created by MacFarlane, a former staff writer for Hanna-Barbera. While there, he developed a short Larry & Steve, which was a remake of his own independent film, The Life of Larry, which became the basis for Family Guy. The idea of an animated sitcom proving to be successful in primetime began with the likes of Hanna-Barbera's The Flintstones and Fox's previous series The Simpsons.

If Hanna-Barbera and Turner had commissioned Adult Swim when they first hired MacFarlane, Family Guy would probably be a WarnerMedia Warner Bros. Discovery property now, instead of a Walt Disney Company property, which bought out 21st Century Fox, the parent company of Fox Broadcasting Company, in 2019.

Family Guy has poked fun at the characters and concepts of Hanna-Barbera since the beginning, usually acted out in the form of a cutaway gag Family Guy has become famous for.

Captain Caveman and the Teen Angels

Kiss Meets the Phantom of the Park