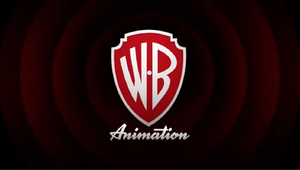 WB Animation logo during the credits of Jellystone!.

Warner Bros. Animation is an animation studio. It is a subsidiary for Warner Brothers that has produced a handful of Hanna-Barbera-based productions, including shows, movies, specials, and various others. Most range from either the Scooby-Doo or Tom and Jerry franchise, although they'll come to produce other Hanna-Barbera projects from time to time.

Warner Bros. Animation as it is known today began in 1989, when Jeanette MacCurdy, who was in charge of productions at Hanna-Barbera, left to spearhead the effort in revitalizing the studio for a modern era. She brought along fellow Hanna-Barbera employee Tom Ruegger, who had been the showrunner of A Pup Named Scooby-Doo at the time, to oversee the production of the Looney Tunes spin-off Tiny Toon Adventures, a collaboration with Steven Spielberg's Amblin Entertainment.