Space Ghost Coast to Coast is an American adult animated comedy talk show produced by Williams Street (formerly Ghost Planet Industries) for Cartoon Network as their first original series. After its formative years, it was fitted into Cartoon Network's late-night programming block, Adult Swim, and then for a brief time GameTap, before returning to Adult Swim. It ran from 1994 to 2008, airing 105 episodes. There have also been several specials from 1994 to 2012.

The series is a spin-off of the more kid-friendly Hanna-Barbera character Space Ghost from a series of self-titled Space Ghost segments from the 1960s and 1980s. Space Ghost upheld the law as a space cop with armbands that allowed him to fly and turn invisible, hence his name. Coast to Coast has Space Ghost retired from saving the galaxy and now hosts a surreal and absurd talk show broadcasting from Ghost Planet, joined by director and producer Moltar and bandleader Zorak, who despite being rehabilitated villains, still make his job a nightmare, although Space Ghost himself isn't always on top form either as he is always rude and mostly asks irreverent questions to his guests. Space Ghost, who's animated in cheap recycled footage (as are all the characters from his era), interviews live-action celebrities via a monitor.

Space Ghost Coast to Coast had two of its own personal spin-offs in Cartoon Planet and The Brak Show, while also creating a back-door pilot to Aqua Teen Hunger Force.

In the spring of 1993, the Senior Vice President of Cartoon Network, Mike Lazzo, with his fellow programmers Khaki Jones and Andy Merill originally planned on editing together the Wacky Races episodes together for one long country race. But one afternoon on Lazzo's television played a 60s Space Ghost episode, which combined with the ongoing late night talk show war between David Letterman and Jay Leno reaching an all-time high, gave Lazzo the idea of turning Space Ghost into a talk show host himself. He tasked Merrill with piecing together a pilot with pre-existing footage.[1] CNN provided a press junket interview with Denzel Washington for Malcolm X,[2] Merrill used a press packaged interview of Denzel Washington for Malcolm X, with his own booming voice as Space Ghost. It was rough, but there was promise.[1]

Space Ghost Coast to Coast found its name after Lazzo and the team were searching for a name for a marathon of old episodes.[2]

The series seemingly ended in 1999, but was brought back in 2001 for the launch of the then-new Adult Swim, although setbacks caused new episodes of Coast to Coast to come first. During this time, a total of twelve episodes were made spanning three weak seasons, since the number of episodes for one season before Adult Swim was around twelve. The focus of Williams Street was clearly more on the quality of their other new series than Coast to Coast.

In 2006, a mini-revival occurred after Space Ghost conducted "live" interviews with guests at the E3 gaming conference, which led to GameTap, a Turner-owned website, ordering more episodes that featured Space Ghost interviewing other gaming experts and executives, along with the occasional musician). Presumably because of each episode only being only a few minutes long, the humor is more on point than when the series began in 1994. Despite this, the new version did not receive that many viewings and was canceled in 2008.

After the final full episode commissioned by Adult Swim, they irregularly dust off the Coast to Coast set for interviews whenever they full the need to promote something, such as the Tom+Ghost summer 2005 block, which featured bumpers featuring Space Ghost talk to Tom and the Mayor, the titular characters of Tom Goes to the Mayor, an Esurance ad with its since retired animated spokesperson, Erin Esurance, one with a MacDonald's customer, Avatar star Zoe Saldana in 2009,[3] Steve Nash in 2010 for Vitamin Water, Tommy Wiseau in 2011 for The Room (due to Adult Swim airing it), and Will Ferrell and Zach Galifiankis in 2012 for The Campaign.

The second test pilot had Gary Owens reprise his role, although when it came to the series proper, George Lowe had been cast instead, due to Owens typically sounding too old and budgetary concerns. This is also why C. Martin Croker stepped in to take the role of Zorak, instead of Don Messick.

Interviews were done pretty straightforward, with a script used in some cases for guests, as Adam West referred to Space Ghost by his real name of Tad, and "Table Read" confirming that Conan O'Brien was following a script. Even despite the fact that the interviews weren't done in a traditional sense, they were then cut up and placed in an inconsistent order so that the guests' answers did not correctly respond to what Space Ghost was asking them.

Early interviews had acting students from New York and Los Angeles wearing ill-fitted Space Ghost costumes talk to the guests, mostly conducted in Atlanta. This was quickly dropped, especially when one young man spoke to the Bee Gees in a Shakespearan manner, creating so much laughter from them that only nineteen seconds could be used. Later episodes had guests respond most times to the voice of George Lowe himself who was phone patched in. The unedited interview in "Gallagher," featuring David Cross and Bob Odenkirk, referred to where they were talking from as "interview pods," which provided them with oxygen.

The June 20, 1998 edition of Billboard reported that there was to be a special musical-themed hourlong episode with Cornershop and Yo La Tengo.[4]

At the Cartoon Network panel for Dragon*Con '99, it was revealed that the producers were sitting on a "huge stack of interviews" that will never get seen, including Paul Westerburg and Peter Scolari, who both walked out, Apollo Smile, and Ben Folds. Dialogue was recorded for the Tick (with Townsend Coleman reprising the role) from The Tick cartoon that aired on Fox Kids, but its parent company backed out, while Captain Planet was to be the first guest to sit in the chair, but was ditched either because the animation didn't turn out well or the producers of Captain Planet and the Planeteers didn't want to be associated with Coast to Coast. They also wanted Kiss, who were receptive, but couldn't reach an agreement.[5]

In 2003, two interviews had been done with Seth Green and Seth MacFarlane. The Seth Green interview was for an episode called "One Way Out," with the remnants of said interview being inserted as an Easter egg for the Aqua Teen Hunger Force episode "The Dressing," that same year.

The music was composed by Sonny Sharrock and Eddie Horst, the latter of whom was also the musical director. The vocals of the theme song were provided by Alfrieda Gerald. For the 1997 season only, Man or Astro-man? provided a new intro and interstitial music.

Premiere dates of countries are in order of release: 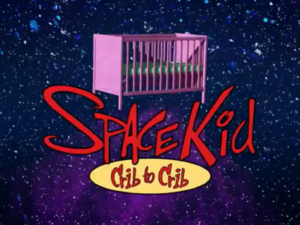 On a tiny budget and modest ratings, Space Ghost Coast to Coast was to inspire the entire restructuring of Cartoon Network's late-night entertainment when they launched Adult Swim in 2001. It inspired other series such as Harvey Birdman, Attorney at Law, Sealab 2021, Perfect Hair Forever (which frequently had Space Ghost in a cameo, sometimes voiced by George Lowe), and The Eric Andre Show.

Ahead of filming the first season of The Eric Andre Show, Eric Andre had several questions for Coast to Coast's creator, Mike Lazzo, but Lazzo had no interest in the series anymore as if he had disowned it, stating "Space Ghost is dead to me."[6]

In 2007, Cartoon Network Spain adapted the series for their TNT, by editing the episodes with celebrities more well known to Spanish audiences.

Aqua Teen Hunger Force Colon Movie Film for Theaters had Meatward set off a missile which accidentally hit Space Ghost as he was greeting the audience of his show, burning off his clothes and skin before he explodes.

In Scooby-Doo! Team-Up #19, it was revealed that Zorak had hypnotized Space Ghost into believing that he had been a talk show host.

Ian Jones-Quartey, creator of OK K.O.! Let's Be Heroes, wanted to do a crossover with Space Ghost Coast to Coast, but after the passing of C. Martin Croker, Jones-Quartey dropped the idea out of respect, as he felt it would've been difficult to do the episode without him.[7]

From 2003 to 2008, Warner Home Video released the majority of the series on DVD. They were unable to secure the rights to "Self Help" from season one, and the entire ninth season has been ignored for some reason. The DVDs have exclusive special features such as audio commentaries from the cast and crew, and other golden nuggets such as deleted scenes. Madman Entertainment released the same content in Australia.

Space Ghost Coast to Coast only once had its own comic, a one-shot by Cartoon Network Comics in 1994, that explained why Space Ghost decided to become a late-night talk show host.

The series then proceeded to have several guest spots in DC Comics' Cartoon Network Presents, Cartoon Network Starring, and Cartoon Cartoons, which occurred between 1997 to 2003. C. Martin Croker was an artist on these.

In 1999, ToyCom, in association with Art Asylum, released action figures of Space Ghost, Zorak, Brak, and Moltar with accessories from the series. There was also an "invisible" variant of Space Ghost, and Space Spectre, who is actually a character from the 80s Space Ghost segments, but may have been confused with Space Ghost's "evil" twin, Chad.