Hassle in the Castle

"Hassle in the Castle" is the third episode of Scooby-Doo, Where Are You! season one. It aired on September 27, 1969 on CBS. It was written by Joe Ruby and Ken Spears, the creators of the show, and produced and directed by William Hanna and Joseph Barbera, the founders of Hanna-Barbera Productions.

Mystery Inc. gets stuck on what is literally called Haunted Isle, where the gang race against a phantom, who is looking for buried treasure.

While the Mystery Inc. gang is boating, the weather turns quite gloomy and they accidentally crash onto Haunted Isle. The island is the location of Vasquez Castle, which had been abandoned for many years prior. They wander the beach until Scooby finds an old map that has a message trying to scare the gang away. They continue to the castle and search for clues.

Once inside the castle, Daphne and Velma start a discussion about a book that Velma once read about trap doors. Daphne denies the thought and in turn, falls through a trap leading her to be separated from the gang. The gang starts searching for Daphne, Daphne soon lands in a separate room and swiftly dodges the ghost's grasp and heads off to find the rest of the gang.

Shaggy and Scooby continue to search for Daphne with Velma and Fred and come across a talking skull that tells them where they need to go. They become so terrified they run into a different room and Shaggy states that he wished he had a ham sandwich to calm himself down. Suddenly, a ham sandwich appears and Shaggy is convinced it is his imagination. He hopes his imagination will cut his sandwich in half which happens after an ax falls on the table. Shaggy once again becomes terrified and both Shaggy and Scooby leave the room.

They continue to run until Daphne hits Shaggy on the head thinking someone is coming. Velma, Fred, and Scooby finally find both Shaggy and Daphne and the gang sees the Phantom for the first time. The ghost gives another warning trying to scare them away. The gang chases the Phantom and tries to tackle him. They fail and see the Phantom walk through the wall. They are all convinced the Phantom is real and the place is truly haunted. Daphne finds the gang's first clue which is an old key with an inscription saying "second passage of The Old Bell." They realize that the inscription is asking them to look in a book and they go to the library.

The gang finds the second passage of The Old Bell and discovers that the word catacombs is underlined. They head to the basement and use the key from the chest to unlock the door to the catacombs. Scooby is sent to survey the room before the rest of the gang enters. He discovers everything is okay and the gang enters to find tons of clues. The gang finds a saw-him-in-two box, disappearing cabinets, levitation tables, and other items commonly used in magic acts. The gang encounters the Phantom once more and is chased around the castle.

The Gang then starts preparing their next trap. The items they use are a suit of armor, a crossbow, and a cannonball, and an old spring as well. Scooby is the bait costumed in a beige coat, a mustache, and a black hat. The phantom is lured into the trap and Scooby accidentally gets caught in it. Scooby captures the ghost by falling on top of him.

The gang unmasks the ghost and discovers the culprit is ex-magician Bluestone the Great. He came to Haunted Isle to find the hidden Vasquez treasure. The gang discovered the way that Bluestone floated was through the use of wires. The police allow Bluestone the chance to perform his walking through walls trick which he performed using a projector and a trick mirror.

Scooby searches for the hidden treasure and instead finds a gopher!

Daphne: You sure picked a spooky day to go boating, Freddy.
Fred: Well it didn't start out that way. What could've happened?
Velma: It's very simple. When the barometric pressure dropped, and the warm offshore air came in contact with an inland cold front, we ran into some unnavigable mugilation.
Fred: You're right, Velma. Whatever you said.
Velma: I said, we're lost in the fog.

Fred: Looks like we've run aground.
Shaggy: Yeah, but, like, where?
Velma: Well, if I'm not mistaken, it looks like we're stuck on Haunted Isle.
Shaggy: I'm sorry I asked.

Shaggy: Like, he went through the wall -- nonstop!
Velma: There's a very logical explanation for all this.
Shaggy: Quick, tell me.
Velma: The place is haunted.
Shaggy: Thanks a lot.

"Hassle in the Castle" was produced as the second episode.[1] When first releasing this onto DVD, Warner Home Video would place it in production order.

It is the first episode to use the standard title card where the gang runs across the screen underneath the title of the episode.

The Phantom is just referred to as "Ghost" in his model sheet.[2]

Bluestone the Great is simply referred to as "Magician" on his model sheet.[3]

The theme song's lyrics were written by David Mook, while Ben Raleigh wrote the music, which was performed by Larry Marks. The score was composed by Ted Nichols, who was credited as the musical director.

Dates are in order of release: 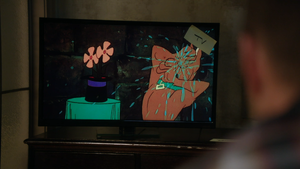