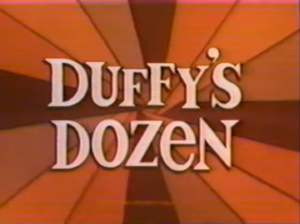 Duffy's Dozen was an unsold animated television pitch produced by Hanna-Barbera for prime-time viewing in 1971, with neither NBC, ABC, or CBS picking it up. The idea of a parent with a large group of trailing offspring was reused for The Amazing Chan and the Chan Clan a year later on CBS' Saturday morning line-up.

The series would have revolved around the adventures of Mr. and Mrs. Duffy and the twelve kids they had adopted every year (eleven years, with a set of twins totaling the number of kids up to twelve) and then took them and their sheepdog travelling around the country to America's greatest national landmarks. To get around, they drove in a transforming camper that can ever roll over the road or glide across a river.

The pitch was presented by Joseph Barbera and William Hanna who were both animated in static poses sitting in director chairs. To prove how much of a hit it would be, they included shots of Fred Flintstone (voiced by Alan Reed) and Yogi Bear (voiced by Daws Butler), joined by a silent Boo Boo) in their respective homes of Bedrock and Jellystone, and Huckleberry Hound (voiced by Butler) on a stage, as well as mentioning some of the previous series they did, with accompanying title cards, which included The Hillbilly Bears, The Perils of Penelope Pitstop, The Banana Splits, Wacky Races, Cattanooga Cats, Josie and the Pussycats, and Scooby-Doo, Where Are You!

Below, the rest of the article will be treated as an episode article would be.

In the pitch, Mr. Duffy tries to get his prized bowling bowl back from a bear.