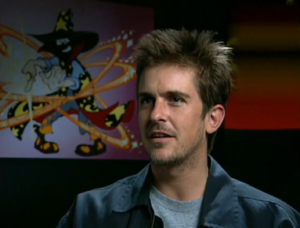 Schlatter in the Tom and Jerry: The Magic Ring: "Behind the Artist's Brush" featurette.

Charles Thomas "Charlie" Schlatter is an American actor and voice artist. He does the voice of Chip and the Flash.

In 1988, Schlatter starred as the co-lead in the film 18 Again! At the beginning of the '90s, Schlatter starred as the titular Ferris Bueller, in a short-lived TV version of the film Ferris Bueller's Day Off. In 1995, he joined the cast of CBS' Diagnosis: Murder's third season, and remained until it was canceled in its eighth season in 2001. He was also the voice of the Flash/Barry Allen on the TV series The Batman and Justice League Action, both of which are unrelated to each other, as well as the version that appeared on Scooby-Doo and Guess Who?