Scooby-Doo! and the Monster of Mexico

For other uses, see Scooby-Doo! and the Monster of Mexico (disambiguation).

Scooby-Doo! and the Monster of Mexico is an American animated mystery/horror-comedy direct-to-video (DTV) film based on the Scooby-Doo, Where Are You! TV series in 1969. It was released by Warner Home Video through the Warner Bros. Family Entertainment label on September 30, 2003. It was written by Douglas Wood, and produced and directed by Scott Jeralds. The film is the sixth installment in the Scooby-Doo 2-D animated direct-to-video film series, and the last to be based on the aforementioned Scooby-Doo, Where Are You! until the fourteenth DTV, Scooby-Doo! Abracadabra-Doo in 2009.

Fred's pen pal, who happens to run a Mexican hotel, invites the gang to visit him and his family. While there, they unravel the mystery of El Chupacabra.

This was the final time Nicole Jaffe and Heather North performed the voices of Velma and Daphne, respectively. Jaffe was glad to relinquish the role, as she didn't find it as easy to do as before, as she found her voice had lowered.[1]

The music was composed by Gigi Meroni and Rich Dickerson.

Dates are in order of release: 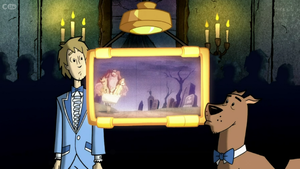