This article is about the theatrical shorts. For the main title character, see Loopy De Loop. 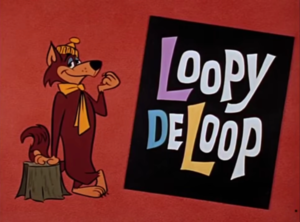 The premise follows a gentlemen wolf named Loopy De Loop, who tries to prove to people that not all wolves can be bad. Loopy would usually help people out, only to be beaten, chased, thrown .etc due to the fact that he's a wolf.

Another recurring character was Loopy's younger troublemaking nephew, Bon-Bon, who would usually drag Loopy into troubling situations he wasn't involved in.

After the theatrical shorts' 48 episode run, Loopy had rare outside appearances. He did appear for his own comic story lineup in the late or early 60s and appeared as a cameo in Laff-A-Lympics #10. He also appeared as a chef in Yo, Yogi! and appears in the Jellystone! reboot as a woman who works at Magilla's Clothes Store.

The entire series has been released on DVD.